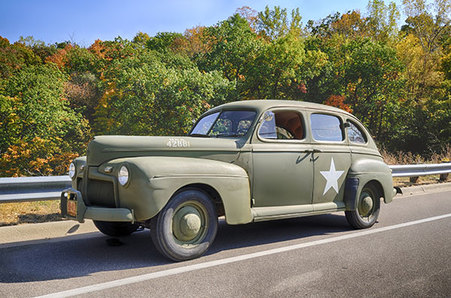 The Ford car was thoroughly updated in 1941, in preparation for a decade of unpredictability surrounding World War II. The 1941 design would continue in an aborted 1942 model year and would be restarted in 1946 and produced until the more modern 1949 Fords were ready
The two previous Ford car lines, standard and De Luxe, had blossomed into three, Special, De Luxe, and Super De Luxe. This time, the entry-level 136 CID (2.2 L) V8 was deleted in favor of a new 226 CID (3.7 L) L-head straight-6, the first Ford six since the failed 1906 Model K. The popular 221 CID (3.6 L) V8 remained as the top-line engine and was standard in De Luxe models.

The "ignition key" for these cars was actually used to operate a bolt lock which, on one end, unlocked the steering column (a feature destined to return, mandated, decades later), and on the other end unblocked the ignition switch, allowing it to be operated. Starting the car was then accomplished by pressing a pushbutton on the dashboard, another feature destined to return with the advent of "smart keys."
​
Although starting cranks had been replaced by electric starters for decades, Ford cars included a manual starting feature until 1948 as an antidote to dead-battery syndrome. The wheel-lug wrench served as a handle (also for the jack) and the jack shaft with bayonet-coupling pins could be inserted through a small hole in the grille to engage a bayonet socket on the forward end of the engine crankshaft. A quick-and-easy twist of the handle was sufficient to start the flat head V8, and the bayonet coupling was self-disengaging for safety.