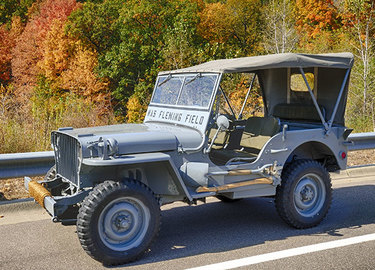 The Willys MB U.S. Army/Navy Jeep, along with the nearly identical Ford GPW, was manufactured from 1941 to 1945. In July, 1940, the U.S. Army distributed requirements for a utility vehicle that would be four-wheel drive, carry three people and have a wheelbase of up to 80”, feature a fold-down windshield and powered by an engine capable of at least 50 h.p. It also had to have a minimum weight of 1,300 lbs. Only three companies entered the competition: American Bantam Car Company, Ford Motor Company and Willys-Overland Motors. Bantam won the bid but the government did not think the small company had the capacity to manufacture enough vehicles, so they contracted with Willys and Ford for production of the Jeep. Bantam built their BRC 40 until late 1941. Willy’s first produced the MA (for Model “A”) and Ford built the Jeep GP. By July, 1941, the government wanted to standardize the design, and chose the Willys model as the standard, mostly because of its powerful “Go Devil” engine, which the troops loved. The best features of the Bantam and Ford models were incorporated into the Willys version which became the MB (Model “B”). Ford’s Jeep was named the GPW, with the “W” standing for the Willys design.
The first 25,000 Jeeps that Willys produced had a welded flat iron “slat” radiator grille like ours. Ford came up with a stamped slotted steel grille for its cars, which was lighter and less expensive to produce. Along with many other designs innovated by Ford, the slotted grille was adapted by Willys and became the Jeep standard in April, 1942. Some say fewer than 25 “slat grille” Jeeps survive.
During WWII, Willys produced 363,000 Jeeps and Ford some 280,000. Original cost to the Army was $649 per Jeep.
​