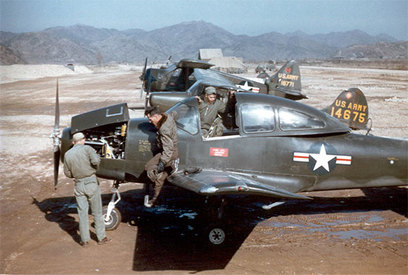 L-17 from Korea
The Commemorative Air Force Minnesota Wing has recently acquired an L-17 Navion. This aircraft was generously donated to the wing by CAF member Harvey Brown.
​
The Navion aircraft was designed by North American Aviation and began production in 1946. It was a way for pilots to come back from the war and have their own family aircraft, one that had lineage with the P-51 Mustang. The Navion was overshadowed by it’s competitor, the Bonanza, and soon North American’s focus shifted back to military aircraft. Ryan Aircraft (who built the PT-22 Recruit) decided to take on the Navion. They saw potential with its short field capabilities and rugged design. Soon they were producing the L-17. L-17s served extensively in Korea, performing duties such as Forward Air Control, intelligence gathering, ambulance duties and VIP transport. General MacArthur had a personal L-17 for getting point to point and observing the front lines.

The L-17 is an example of an aircraft that has a storied history easily forgotten, similar to the Korean War. Post Korea, L-17s were used by the Army and Air Force for various duties, serving through Vietnam as “Hack” aircraft (used for whatever necessary duty on base, or pleasure flight).
​
Our goal is to convert the Navion F Model that was donated into an L-17, painted in Army colors. During this process, necessary maintenance will be performed on the aircraft, as well as restoration, replacement, and repainting of systems and structure. The project has excited many people in and out of the CAF, and it will be our goal to create an award winning restoration. If you would like to help financially with the project, we've setup a way for you to donate below. Of course we are always looking for volunteers at our hangar. If you've never been to the CAF Minnesota Wing Hangar, now would be an excellent time to stop by and see all that's happening!